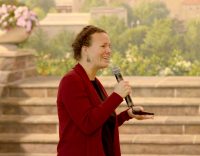 Dr. Ali Michael was the presenter at the January 23, 2019 Hershey All Things Diversity Session held at the Hershey Story Museum. Michael, an educator and author, is addressing micro-aggressions and is working to create an understanding to help to change racial and social injustice.

Dr. Michael shared that she was raised in a white suburb in Pittsburgh and explained that her family did not talk about color. “We were to act colorblind and not talk about it because my parents felt that it was rude,” she said. When she attended college and was asked to participate in discussions, she found it difficult because she was being asked to do something that she had never done. She came to realize that to understand bias, she had to “study whiteness.”

She provided a definition by Dr. Derald Wing Sue on micro-aggressions, “Racial micro-aggressions are brief and commonplace daily verbal, behavioral or environmental indignities, whether intentional or unintentional, that communicate hostile, derogatory or negative racial slights and insults toward people of color. She talked about her experience entering a school for a meeting and how she was treated and how differently her black, lesbian colleague was treated.

Audience members discussed scenarios to determine the intent of the described micro-aggression and the impact that it made. Dr. Michael told a story about a medical student which clearly demonstrated both intent and impact. The medical student was with a group and gave a synopsis. When she finished, the physician, based on the color of the student’s skin, said, “You speak English so well.” The student thought, “I was born in America and don’t know any other language.” The intent of the physician was to say something nice; however, the impact caused the student to be distracted the rest of the day because the cumulative effect and larger message was, “You don’t look like you belong.”

How can we as a community try not to offend others when we don’t realize when something that is said is offensive and hurtful? Members of the audience were reflective and honest and shared times when they made comments that were not intentionally hurtful, but they understood how they may have been received.

We can lessen the effect of micro-aggressions by being honest with ourselves about how we feel and look at things and have compassion and understanding on how others may feel.

Dr. Michael reviewed actions that can be taken when a micro-aggression occurs:

She explained the following points to consider when you receive a micro-aggression:

Many micro-aggressions are based on assumptions, lack of knowledge, and unconscious bias. “Majoritarian defines what’s normal,” she said. Dr. Michael also pointed out that a change that is made for the benefit of one can result in an improvement to many. She explained, “When we accommodate for a small group of people, it results in benefits that serve a larger population.” She explained how this happened when handicapped ramps were new for those with physical disabilities, but also helped those with strollers, bikes, hand carts, and anything with wheels.

During Dr. Michael’s presentation, she said, “It’s not about being politically correct, but about understanding and being kind.” She also shared two meaningful and impactful quotes:

“We want to build a beloved community, which is what we build together when you stand up for me and I stand up for you.”

“Meet hate on the other side with love.”

Ali Michael, Ph.D., is the co-founder and director of the Race Institute for K-12 Educators and teaches in the mid-career doctoral program at the University of Pennsylvania’s Graduate School of Education, as well as the Graduate Counseling Program at Arcadia University, and holds the Davis Visiting Professorship at Ursinus College. She also sits on the editorial board of the journal Whiteness and Education.

Dr. Michael’s works include the following:

What do White Children Need to Know About Race?, co-authored with Dr. Eleonora Bartoli in Independent Schools Magazine, winner of the Association and Media Publishing Gold Award for Best Feature Article in 2014

The next session of the Hershey All Things Diversity series will be held on March 27 from 5:30 to 7:15 p.m. at The Hershey Story Museum on Chocolate Avenue. Shaashawn Dial-Snowden will present Promoting Social Justice and Equity and Creating Multi-identity Embracing Brave Dialogue. Visit the Township’s Hershey All Things Diversity website for more information on the event and presenter. https://www.derrytownship.org/community/hersheyallthingsdiversity