Honoring the Inherent Dignity of a Human Person: A Mother’s Story 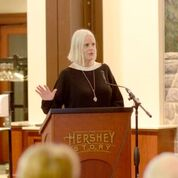 There’s no doubt that Joan Rater is a creative and talented writer as evidenced from the ratings for Grey’s Anatomy, a television drama that she co-wrote for 10 seasons. Her witty personality, craftiness with words, and love for her child, created a tale for Joan to share on LGBT (Lesbian, Gay, Bisexual, and Transgender) acceptance.

Joan was the presenter at the Hershey All Things Diversity Session held at the Hershey Story Museum on January 15, 2018. Her presentation titled Honoring the Inherent Dignity of a Human Person: A Mother’s Story, began with Joan describing a distraught phone call to her friend after learning through a loving email from her daughter Maggie, that she was questioning her gender identity. Joan said that she was scared and thoughts ran through her mind. “What will her life be like, what about surgery, will it still be the same person I know?”

Maggie was born into a female body, attended a girl’s school, but didn’t feel like a girl, which led her to suicidal thoughts. Joan said, “It’s a burden not to be yourself.” She stated that teen transgender suicide is high.

She then lightened the mood and laughed as she described the struggle the family had in using “they”, “them”, and “theirs”, as requested by Maggie until “they” could identify with a gender. She said that her mom asked for a “grandma pass” because it was so hard to change to plural pronouns in reference to Maggie, but Joan thought that it was important to try.

Maggie wanted to be called Tom. Another tug at her mother’s heart strings, “I wasn’t going to be able to use her name anymore, am I losing my girl,” she said. Joan told the audience that she cried and then she transitioned. She said, “Not much had changed and everything had changed.” As time passed, she said that she didn’t lose anyone. She mentioned the organization Transforming Families (https://www.transformingfamily.org/), a Los Angles based family support group that wants to create a positive environment for children, adolescents and their families to explore issues of gender identity. Maggie’s younger sister needed to be told, which proved not to be quite as difficult as Joan thought.

Joan talked about the power of love and explained that a child who is exploring their gender identity needs to see that they are worthy of being loved.

Tom had worn a binder to conceal his breasts. The discomfort caused from its constriction led him to choosing to have surgery to remove his breasts. As parents, Joan and her husband Tony feared “what if he changes his mind”. They realized that, “you need to choose to be who you are”. She said, “We saw that he needed this and needed to be a man.”

Later, he elected to have hormone therapy. As a musical theatre major, this would change his “beautiful” voice and affect his career. Joan said that he felt that his happiness was more important than his career. Tom became an actor and a celebrity for his transgender role as Cole, in The Fosters, a series on ABC Family.

We are grateful for Joan’s desire to candidly share her family’s experience to help the Hershey community to have open dialogue, acceptance, and love for each other and our differences.