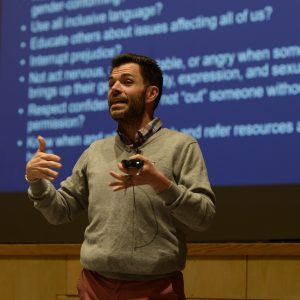 Snovel, who works for the Pennsylvania College of Art & Design, was previously the Executive Director for the Pennsylvania Commission on LGBTQ Affairs, and defines these concepts as a “norming phenomenon where heterosexuality and/or being cisgender (identifying with the gender identity that is culturally associated with your bioloigcal sex) is woven into the fabric of culture and society as the expected and normal.” He says that this phenomenon affects how we see the world and how the world is advertised and promoted to people. It can also make people of the LGBTQ+ community feel unwelcome.

In order to become a more diverse and welcoming community, this issue is something we should not only recognize but also try to do our part to change.

The beginning of Snovel’s presentation focused on why talking about this issue is important, certain phrases that are good to know, and how heteronormativity and cisnormativity can be seen a lot in advertisements.

He explained that talking about diversity is important because being aware of how our culture can affect people is how we get one step closer to becoming diverse and welcoming. To reach this point, we have to be aware of the problems different communities face.

Homophobia/transphobia, heterosexism/cisgenderism, and heteronormativity/cisgendernormativity are three categories and terms that Snovel describes as big issues that  LGBTQ+ communities face. “We know that when these ideas pervasively creep into systems and into groups of people, this can then lead to effects like discrimination, violence, and victimization,” Snovel said.

He also gave examples of types of advertisements that feed into these negative influences on culture, such as an image of what a “normal” family is expected to look like that may be different from many actual families. He showed ads for couples’ Halloween costumes that focus on heterosexual couples—such as a male doctor costume and a female nurse costume. He also discussed how the press can sometimes cover stories about LGBTQ people differently than heterosexual and cisgender people, as in the case of media coverage of a gay athlete kissing his partner after a competition. Heteronormativity has affected all these areas, and Snovel recommended that people try to make their advertising inclusive of all communities rather than only straight, cisgender, white families. 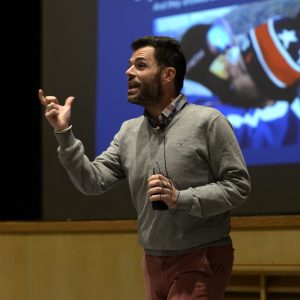 Snovel talked about the more biological part of the Gender Unicorn first, describing the three different kinds of Sex Assigned at Birth. Those three kinds were male, female, and other/intersex, which are all solely based on what body parts and specific chromosomes you were born with. He describes that the rest of the categories did not have to line up with the sex assigned at birth, and that one can identify their gender identity differently than their sex, one can express their gender differently, and be emotionally and/or physically attracted to whoever they want.

When talking about the Gender Unicorn, Snovel describes that “where we start to get tripped up and make mistakes is when we make assumptions in any category other than the one we know. If you happen to know that someone is a biological female, you don’t know anything else about that person in any of the other categories.” It is important to make sure you do not assume in order to avoid making mistakes about someone else’s identity. 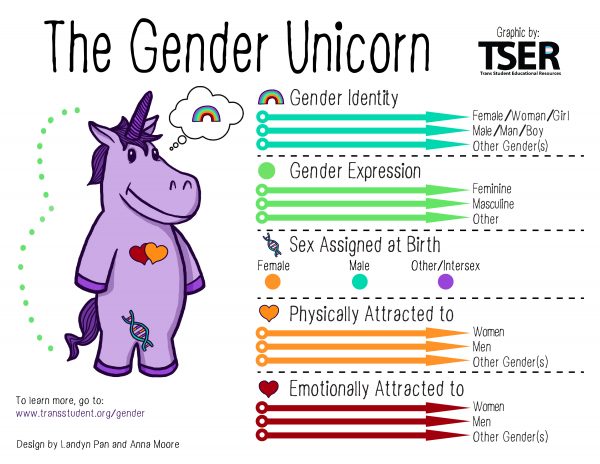 To read more about the Gender Unicorn, click here.

Finally, Snovel discussed how doing little things like watching one’s language can go a long way, and how an individual could go about doing that.

“It’s really hard, but we have to check ourselves,” Snovel says when talking about watching our language. This specifically means watching which pronouns we use, as using the wrong ones can be what Snovel calls a microaggression to the misidentified individual. Assuming that someone who is biologically male in turn identifies as being male and uses he/him/his pronouns can be a harmful mindset. Because of this, Snovel suggests watching yourself when using pronouns to make sure you do not wrongly assume someone’s identity. He addressed that while some may deem these ideas unnecessary, it could hurt the individuals being misidentified a lot more than one realizes.

Snovel emphasized the importance of the difference between intent and impact. Even if you didn’t intend to offend someone by identifying them incorrectly, the impact could go a lot further than you think. That is why Snovel believes watching your language can be very important.